Apple iPhone 6S Vs Apple iPhone Se: Just six months after the release of iPhone 6s and iPhone 6s Plus, Apple unveiled the iPhone SE. Though smaller and more affordable than iPhone 6s, it came with many of the same features – making it a very popular release. The 4-inch screen of iPhone SE is ideal if you like a pocket-sized phone that’s easy to use one-handed. In appearance, it’s closer to iPhone 5S than iPhone 6s – but in performance, it’s a good match for the latter.

In fact, iPhone SE has the same 12-megapixel camera as iPhone 6s so you can capture brilliant images on both. It has the same A9 processor chip, too, so you can expect the same speed and performance, and it’ll continue to support the latest versions of your favorite apps for years to come. 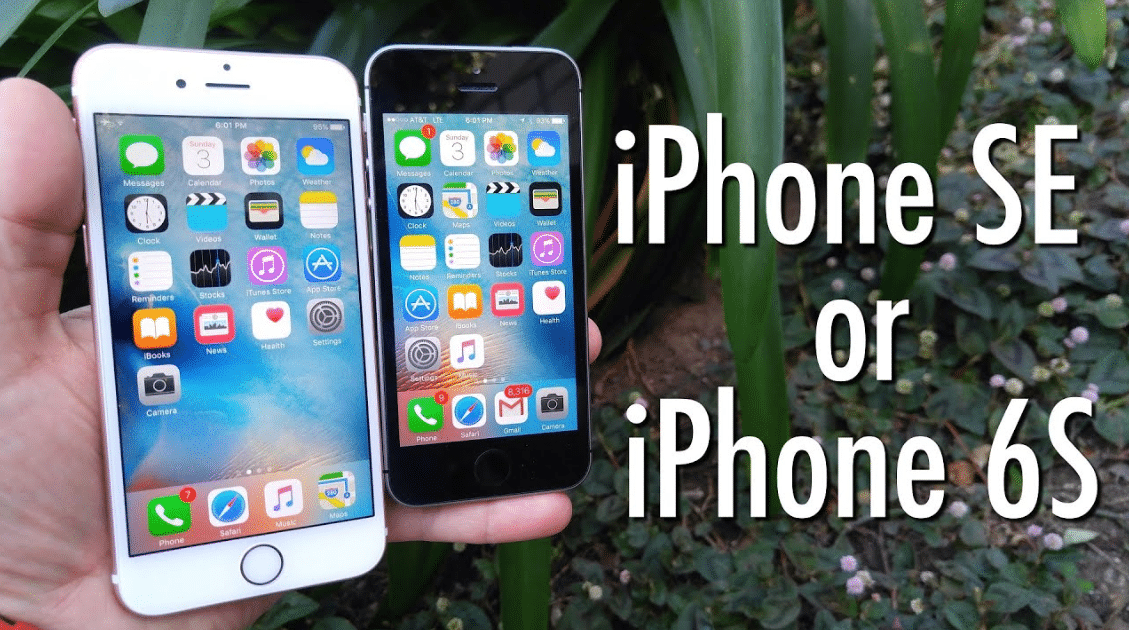 Depending on how you use your phone, you might find the 4.7-inch screen of iPhone 6s easier on the eyes – especially if you like to watch videos on the go. One further difference is 3D Touch – iPhone 6 has it – iPhone SE doesn’t. So if you want to use the more sophisticated features of apps you’ll find iPhone 6 a more attractive proposition. But if you just want the benefit of Apple’s A9 chip, easy to use operating system and a superb 12-megapixel camera, iPhone SE is certainly a great choice.

The screen is the key difference between the two devices. The iPhone SE comes with a smaller four-inch display, the same size as the old–school iPhone 5s and iPhone 5c.

That compares with the larger 4.7–inch screen on the iPhone 6s and means you can use this new model in one hand easily. There’s the same Retina Display too. One thing missing, though, is support for 3D Touch.

This remains a feature only found on the iPhone 6s and iPhone 6s Plus and means the iPhone SE can only register swipes and taps, not pressure. Apple has made a big play of the iPhone SE having similar features to its flagship iPhone 6S.

The camera is the best example, with Apple loading up its four-inch model with the same snapper as its top-end device.

The latter means you can capture what happens just before and after you hit the shutter.

There is also 4K video shooting and editing support in iMovie, although the 16GB model is likely to run out of space quickly if you reel off ultra hi-def clips.

For such a design-focused company, reusing the four-year-old iPhone 5 chassis for the iPhone SE shocked a lot of people. But this actually comes with a lot of positives:

Yes, the iPhone SE is significantly smaller and lighter than the iPhone 6S. In fact, it’s a true one-handed the phone, even for those with small hands. This is a revelation in today’s phablet-obsessed world and – while both phones could (and arguably should) have smaller top and bottom bezels to reduce their sizes further) – they aren’t the huge slabs most flagship smartphones are today.

TCL Roku Smart LED TV Is Half Off At Walmart Today

Aside from size, the iPhone SE is also far boxier than the iPhone 6S. It’s a case of hard angles vs curves and this actually makes the iPhone SE easier to hold as it feels less slippery. Whether it looks as good, however, is a matter of personal opinion.

It is almost six years since Apple changed the smartphone world with the iPhone 4’s ‘Retina Display’. But time has marched on:

Yes, neither phone sports the extreme 2K (2560 x 1440) resolutions sported by iPhone rivals, but which has the edge? It’s the iPhone 6S. Its display is brighter and the contrast ratio is greater. That shouldn’t be surprising as the iPhone SE uses an old iPhone 5S panel with no upgrades.

Which is better iPhone 6s plus or iphone SE?

The iPhone 6s Plus, specifically, also has better battery life and a rear camera with optical image stabilization. Consequently, if you’re looking for the smallest, fastest iPhone, the iPhone SE is your best choice. In fact, it’s your only choice.

Which is better iPhone 6s or SE?

The main difference between these two phones is the screen size. The iPhone SE marks a return to the 4-inch form factor that Apple abandoned with the arrival of the iPhone 6 in 2014. … This looks to be the same 1136 x 640 IPS LCD display as can be found in the iPhone 5S.

What does the SE stand for on the iPhone?

Apple has finally confirmed what the SE in its new iPhone’s name is for. The new phone’s name stands for Special Edition, according to Phil Schiller, Apple’s head of marketing. The senior vice president confirmed the name to journalist Jason Cipriani.

iPhone Se Vs iPhone 6S Plus

Kodi Latest Version – How to update it